Georg is a partner at MARCK and was admitted to the bar in Germany in 2008.

Georg studied law at the universities of Freiburg i.Br., Grenoble (France) and Münster (Westfalen, Germany). He holds a Doctor of Laws degree from the Westfälische Wilhelms-University in Münster. Georg also holds a degree in Economics for Competition Law of King‘s College, London.

Georg served his legal traineeship (Referendariat) at the Higher Regional Court of Düsseldorf (Oberlandesgericht Düsseldorf) with stations at the Directorate General for Competition (DGCOMP) in Brussels, Hengeler Mueller in Düsseldorf and Blake Dawson (now Ashurst) in Sydney, Australia. After being admitted to the bar (Rechtsanwalt), he worked at Freshfields Bruckhaus Deringer LLP in Düsseldorf from 2008 until 2014, where he advised national and international clients in all aspects of German and European Competition Law. He then worked for two leading international retail companies, most recently as Chief Compliance Officer and Vice President for Competition, Compliance and Data Protection.

Since 2021, the German business magazine “WirtschaftsWoche” regularly ranks Georg Schmittmann as one of the most renowned lawyers for Competition Law. 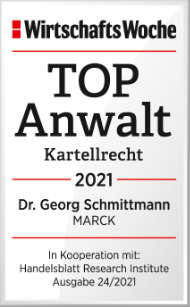